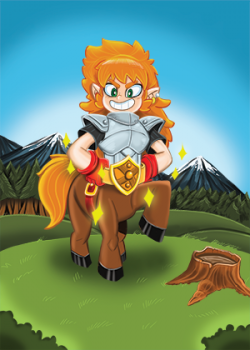 Developing the Munchkin Collectible Card Game has been an eye-opening experience. I'm not going to get into how the sausage is made in this post, but I do want to recognize the people who have put so much hard work into this project.

Eric Lang and Kevin Wilson, over the course of more than a year and a half, have crafted an incredibly fun game unlike anything I've played before. Working with them has been a fun and enlightening process.

We have had the good luck to work with several artists and colorists who have made this game look phenomenal. I plan to do another post highlighting each of them individually, but for now, I'd like to thank (in no particular order) John Kovalic, Katie Cook, Ian McGinty, Mike Lucas, Lar DeSouza, Tom Siddell, Shane White, Stephanie Chan, Fred Stresing, Meg Casey, and Lee Simpson.

I haven't been alone in the development of the game here on the SJ Games side, either – it's simply too big for one person. Darryll Silva helped me make the cards funny for CCG fans and often found the "whoa, too far" line by leaping across it. Balancing a collectible card game is no easy task, but Darryll, along with an awful lot of playtesters, helped make it happen.

Shelli Galey has done the work of hundreds – or at least a couple of people – wrangling our very talented artists and amazing colorists. This is an unfortunately short thanks for what has been a huge part of this process.

Sabrina Gonzales has been in a knock-down drag-out fight with the layout of the cards for so long now that we're not sure who is winning. But the cards look great and she's responsible.

Sam Mitschke was a late addition to the team but has, through sheer force of will, gotten this tanker of a project back on the right path. Thanks to him, we are on track to finish this first set and start working on expansions!

Andrew Hackard has always been ready with advice, a punny card title, or at least a very meaningful shrug.

Phil Reed is the one who made this entire thing happen in the first place. Once this game launches and you all realize how much lighter your wallets are, blame this guy.

Of course, I can't leave out Steve Jackson. His advice has helped shape this into the exciting and fun game that it is today.

We're still tweaking the first set, but we do see light at the end of the tunnel. That light is the oncoming freight train that is the next set . . . but after everything we've been through and learned this time, we'll be ready for it.