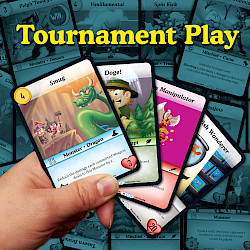 Now that you know more about the Munchkin Collectible Card Game starter sets and the booster expansions, we'd like to delve into our planned tournament schedule at both regional and national events.

Our plan for organized play during the game's first year is three-pronged.

First, we'll send organized play support kits directly to retailers who either purchase the kits from us, or provide us with proof of purchase of a case of booster pops. (Subscribe to our Retailer Newsletter for up-to-date information on how to do this!) Each kit will contain neutral Hero cards, event prizes including copies of special limited cards, and draft tournament guidelines.

These kits have everything your local game stores need to run tournament events whenever they'd like, including on our release event dates (March 3 for the core set!) and other game day events.

Second, we'll have tournaments at many of the conventions at which we’ll have a presence throughout 2018. To kick us off,  we’ll have a 24-person tournament with booster packs as prize support at PAX South in January, before the game's release. Like our Munchkin Collectible Card Game Facebook page to get regular updates about conventions at which we'll be hosting events.

Our Tournament and Release Calendar 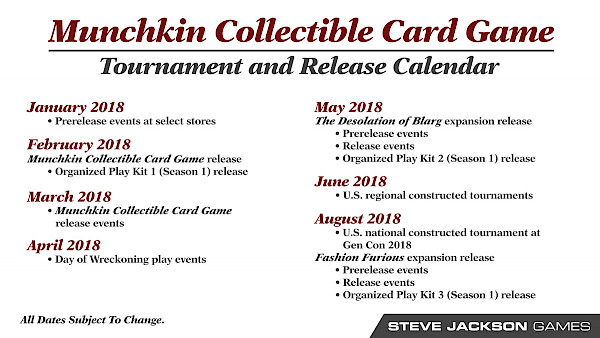 describes when we’ll be releasing the components of the Munchkin Collectible Card Game, including the starter sets, known expansions, and Organized Play kits. It also outlines when we’ll be holding the constructed tournaments we've planned at both regional and national events, as well as our prerelease and release events that celebrate this momentous occasion.

To start training for our constructed tournaments, purchase our special Munchkin CCG - Holiday Preorder Bundle, available through Warehouse 23, or take this form to your local game store to secure your starter set! Starter sets hit shelves in February 2018!