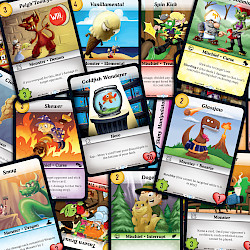 No two card games draft exactly alike. And here in the offices of Steve Jackson Games, over the last few months we've had a lot of fun trying out drafting the Munchkin Collectible Card Game.

(Not sure what a draft is? Here are our draft guidelines.)

First, the deck list (it includes one of each card, unless otherwise specified) –

There are a couple of broad, overarching themes here that make the deck work.

This deck includes one-third to one-half Monsters. In our draft adventures, we've found that players often build Munchkin Collectible Card Game decks with about that proportion of Monsters. Monsters and Mischiefs are the two card types that most often deal damage to your opponent's Hero, and Monsters come back to your hand each round to keep trying again. (For Mischiefs, keep reading!)

Out of those 10 Monsters, four cost 2 gold to hire, three cost 3 gold, two cost 4 gold, and one costs 5 gold. This gives you Monsters to hire at a variety of gold levels, with more Monsters at the lower costs. That means you're more likely to draw low-cost Monsters you can use early in the game, and to then eventually draw into the bigger, more expensive Monsters as the game goes on and your resources ramp. If you do happen to pull several high-cost cards in your starting hand, don't forget about the mulligan rule – shuffle and try again!

This deck includes seven pieces of Loot: one rank 1, three rank 2s, and two rank 3s. Four Allies round out the deck's defensive options. They're all relatively cheap, with costs of 1 or 2 gold, so they'll be usable any time during the game.

The deck features nine Mischief cards. While Monsters tend to be more efficient picks – in terms of gold and cards – for dealing damage, Mischiefs can't usually be blocked by Loot or Allies. The trade-off is that most Mischief cards are one-use-only. In our experience, we've found that you can build a good deck with just a couple of Mischiefs, or you can devote a third of your deck to making Mischief, as this deck does.

Finally, this deck has no Locations! Locations are best when you can break them in your favor – that is, when you can build your deck in such a way that you’re going to benefit more from the Location than your opponent is. That’s harder to accomplish in a draft than in a constructed deck.

Now let's talk about some of the specific cards in this list, and why they work well in this draft deck.

It's an old, tried-and-true drafting rule that you want cards that your opponent is going to have a hard time avoiding or mitigating. Any time you can pull a card that rises above the back-and-forth that most cards have, you've made it more likely that you can build an efficient path to victory. In this deck, there are a few Monsters and Mischiefs that fit that bill.

Smug might have only 3 health, but he reduces the attack value of every weapon committed to the fight against him, so Smug's a lot harder to squish than he looks at first glance. The chances that your opponent is going to take him out are lower than for your average Monster; he will probably do some damage for you.

Moose, on the other hand, is just plain hard to squish. With 6 health, once you get the Moose in play, he's probably coming back next turn.

Spin Kick is a great card to draft – pretty much no matter what else your deck is doing. Dealing 4 damage to a hired Monster and its controller, directly from the hand, out of nowhere, on your opponent's turn? Yes, thank you.

Tavern Brawl can be another big Mischief hit to your opponent that they won't have many ways to interact with.

Last, Stuff Shaming, The Final Countdown, and Skewer all provide automatic damage to an opponent after a specific trigger (either Reckoning or card draw), and all three cards are "stuck" to either your opponent's Hero card or a card in their Hoard. There are relatively few ways to get rid of cards that get stuck to you in the Munchkin Collectible Card Game, so this could be a reliable source of regular damage.

Flaming Armor, Belt Buckler, all the Allies, Clobberknocker, Big Baby Bandage, Doge!, and Spin Kick in this deck all work this way.

Another kind of card it can be good to pull in a draft are cards that provide some benefit, optimally recurring from the Hoard, that boost your overall strategy. These cards might do something like one of the following:

Finally, you’ve got the rank-and-file of this draft deck: All those Monsters that may or may not get a hit in before their demise. Glassjaw, Vanillamental, Drop Bear – all are decent Monsters that can sap your opponent's defenses and will do at least a little damage if they can break through to the Hero.

And that's about all there is to say about this draft deck.