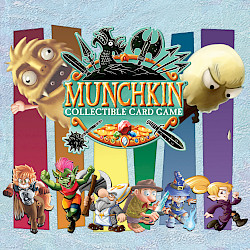 The Munchkin Collectible Card Game combines familiar CCG concepts with new mechanics to make a game that plays like nothing else out there. Choose your favorite Hero and build a deck that suits the way you play!

While each Hero has a specialty, you aren’t limited to one playing style. When building your deck, a clever mix of class cards and neutral cards (which can be used by any Hero) makes your Hero versatile and dangerous to any foe. The starter decks give you a small taste of what each Hero can do, but the 12-card booster packs offer a much wider assortment of tools that help you cause all sorts of mayhem.