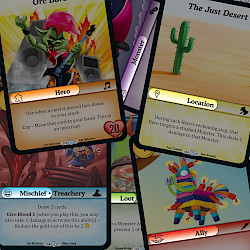 There are six types of cards in the Munchkin Collectible Card Game: Hero, Loot, Monster, Ally, Mischief, and Location. Each of these brings its own level of strategy to deckbuilding and playing the game. Let’s look at what each one does.

First up, the Hero. The Hero is your character; you must have one with every deck. There are six classes of Heroes, and each class has cards that can be used only by that class. There are also neutral Heroes, called Wanderers, for draft play.

The most important thing to know about your Hero is that accumulating damage is the main way you win or lose the game. If your Hero takes damage equal to its life, your Hero is squished and you lose! Pro tip: Try to make sure that happens to your opponent first.

For a detailed discussion about how each Hero is different, take a look at "It's Party Time!" by Sam Mitschke.

Another type of card in the Munchkin Collectible Card Game is Loot. Loot cards are your bread and butter for defensive, utility, and sometimes offensive actions. Loot cards have three subtypes: Weapon, Armor, and Trinket. Whether it’s busting out The Banhammer weapon as the Centaur Warrior to block incoming damage and deal some back to your foe's Monster, or peeking through your opponent's deck with the Thief’s Platinum Lockpicks trinket, Loot cards provide a wealth of gameplay options.

As you level up each turn, your Hero can equip both more and better Loot, since the combined ranks of all your equipped Loot can’t exceed your Level.

Everyone has a price, even Monsters, who won't just pummel your opponent for free. Every Monster must be hired with gold. Some monsters cost a little less and come with a weakness or a bad effect on the Hero who hires them, while others may have amazingly strong abilities that cost extra gold.

However, the goal of every hired Monster is the same: to run through the Dangerous Monster Zone at their own peril in an effort to deal damage to the enemy Hero.

The Ally card type costs a small fee when played, but provides an enormous benefit. Many Ally cards have abilities that will aid you throughout the game. Some effects require the Ally to be zapped, but some are always on. A good example of an Ally with a passive ability (an ability that's always on) is Barbarian the Librarian. He allows you to draw a card after you squish an opponent’s Monster.

The one thing every good Ally does is put their life on the line. If you commit an Ally to defend you against an opponent's monster, the ally takes all damage that might have gone to your Hero, even if it means the Ally ends up squished. Better them than you!

Aptly named, Mischief cards are all about throwing a wrench into your opponent's plans. They feature a rich variety of gameplay effects such as healing, dealing damage, forcing cards to zap, and outright squishing opponent's cards.

Playing Mischief cards costs gold, but when timed well, these cards can bring your opponent's turn to a screeching halt or give you enough time to eke out the win.

Finally, we have Locations. Each player may have one Location at a time, and each Location typically affects both players. Sometimes this may be a powerful effect such as that of the Warrior Location Inhumane Society, which reduces the gold cost of every Monster hired by one. Other times, it might be a bit more unforgiving, such as the Cleric Location Tax Heaven, where once per turn each player will take 1 damage but gain 1 gold.

The key to using Locations is to choose one that you get more benefit from than your opponent. In a Weapon heavy deck, you might considering running Epic Loot Inc. so that each weapon you play gains +1 Power. If your opponent doesn’t have many weapons, this can beef up your defenses to defend against hired monsters, without giving them an advantage. Best of all, Locations are free!

That wraps up the six different type of cards you'll find in the Munchkin Collectible Card Game. As you can see, there is a lot that each card type can do. And we haven’t even started to go over how awesome Subtypes are! Maybe next time . . .