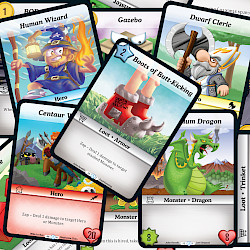 We know that once you try the Munchkin Collectible Card Game, you won't be able to stop playing! As publishers of a collectible game with randomized cards, we also know that one of the questions you'll ask after your first game is: "How hard will it be to find more cards?" followed quickly by "How will reprints affect the value of my collection?" To answer those two questions, we're announcing our reprint policy before the game reaches your local store.

Starters: The three two-player Starter Sets are intended to be evergreen introductions into the game and will be kept in print as long as necessary. We're packing boosters into the first-printing starters as a bonus. After the first printing, the Starter Sets will not include a randomized booster pack. We plan to create new starters in the future, but the next core set will not reach stores until 2019.

Boosters: Booster expansions are limited. Each booster release will be stagger-shipped, with the first wave including enough displays to cover pre-orders plus approximately 20% (if possible). Eight weeks later, a second, smaller, wave of booster displays will be ready for distribution sales, and at that time we will offer distributors an opportunity to place a preorder for a third wave which will arrive approximately 90 days later. After that point, the booster will be retired. We will revise this schedule as necessary but plan to follow this as closely as possible for the game's launch and the first booster expansion, The Desolation of Blarg.

Protected Cards: As the game grows, we will select some cards and shift them to protected status. Protected cards will not be reprinted in future sets, even with new art, though we reserve the right to create cards with similar powers and abilities for later expansions. Once a card is placed on the protected list, it will not be reprinted.

We're sharing this information early so that everyone starts the game on an equal footing. Even though the Munchkin Collectible Card Game is designed as a full CCG with card rarities, we have taken steps to guarantee that the rarest cards are not the strongest cards in the set. Instead, they are designed as fun collectibles, not "I Win!" cards. We hope that this approach to rarity, combined with early notification of our reprint schedule, gives you everything you need to know before buying your first Starter Set and sitting down for your first session of the Munchkin Collectible Card Game.