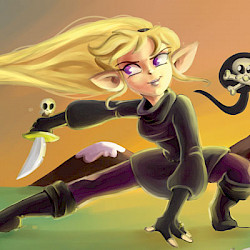 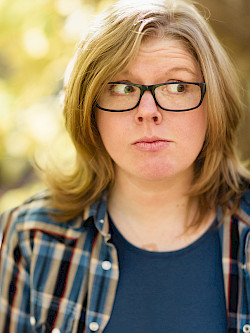 We are sure that once you look through the fabulous art created for each of the Munchkin Collectible Card Game Heroes, you’ll want to know more about the illustrators themselves. In this new series of articles, we interview the talented artists who illustrated each of our Heroes to give you a peek at what it took to bring them to life!

The first artist on our list is Katie Cook, who in the past has lent her brand of heroic art for games such as Munchkin Cthulhu Guest Artist Edition, Munchkin Spell Skool, and the Munchkin Oz Guest Artist Edition, among others. She’s the creator of Gronk: A Monster’s Story, has worked on licenses such as Star Wars, Lord of the Rings, and Fraggle Rock, and is now part of our Munchkin Collectible Card Game team with her illustrations for the Elf Thief!

To learn more about the process behind illustrating such an anticipated project, we sat down with Katie and talked about her experience drawing for the Munchkin Collectible Card Game.

You’ve worked with Steve Jackson Games a few times now! How did working on the Elf Thief deck compare to other Munchkin games and expansions that you’ve illustrated?

Actually, this was the first set that I did all my line art digitally! So that was super different for me. I don't think anyone will notice, but I certainly liked having that "undo" option in Photoshop.

Although the Collectible Card Game is based on Munchkin, it is a completely different game. Was there anything that you did to separate this from previous Munchkin games that you’ve worked on?

The character of the elf is a very different style than the other cards I've done for Munchkin. She's a little softer, less "cute"? Does that make sense?

What did you most enjoy about illustrating the Elf Thief deck?

What is your favorite card for the Elf Thief?

Any of the Mugsy cards.

What was more challenging to illustrate?

The playmat itself. I had to have playmats explained to me.

Is there a card you thought was the funniest? 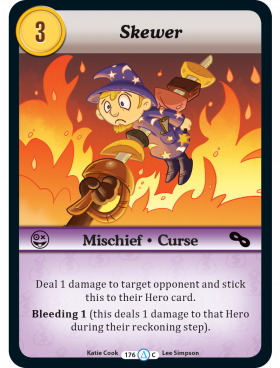 How is illustrating part of a collectible card game different from anything else you’ve done?

I love doing the card games for Munchkin because I get to draw a bajillion random, fun things. Usually I work in comics and books so I have to draw a limited number of very specific things . . . the cards are a fun break.

What are some current projects you are working on?

I'm doing some work for the Disney Wonderground Gallery right now that's very fun . . . all the while I'm doing a webcomic "Nothing Special" on Line Webtoon and working on books for Disney (both writing and drawing!). Fun stuff.

We hope you are excited and ready to get your hands on the Elf Thief deck; preorder the Cleric & Thief Starter Set to get it as soon as it releases in February 2018. You’ll get to admire all of Katie Cook’s beautiful illustrations while you cheat your way to victory!