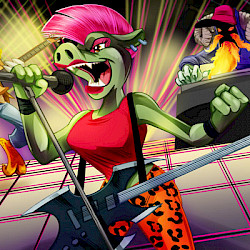 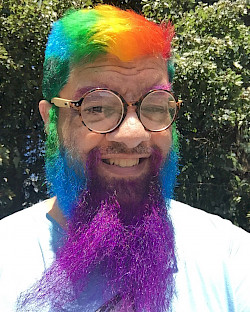 All six Munchkin Collectible Card Game Heroes are great in their own way, but none are quite as cool as the Orc Bard. I mean, come on – she's literally a rock star. And here for your reading pleasure is an interview with the man who brought her rockin' ways to life!

Lar deSouza is known in part for his work on the webcomics Least I Could Do and Looking For Group. Previously for Steve Jackson Games, he illustrated a Guest Artist Edition of Super Munchkin and the upcoming Munchkin Cheats. In the Collectible Card Game, he did the art on all the Orc Bard class cards, including The Final Countdown, at right. Enjoy!

When you were approached to draw the Orc Bard for the Munchkin Collectible Card Game, what was it like being able to focus on one particular character, versus previous Munchkin art assignments? 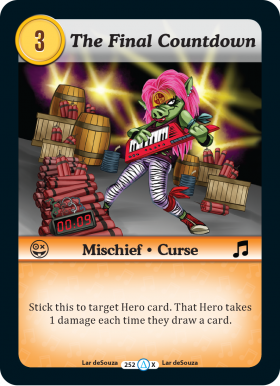 I felt it was quite a responsibility to have a focus character. Even though I was springboarding off of John Kovalic's original concept, I had a good amount of leeway in putting my mark on the character. I wanted to get all that fun "rock and roll" energy along with the adventuresome nature in there.

You've worked on two webcomics, Least I Could Do and Looking For Group, for many years now. You've also illustrated for Munchkin before. Did your previous work influence the design of the Orc Bard?

I don't think so. I had the opportunity to work on Super Munchkin, which is all comic superhero themed. The Orc Bard was a fantasy setting with a lot more established world details. While working on the webcomics has given me the tools to create, even that was informed by my earlier experiences in illustration and cartooning. I'm kinda old. ;) I did try to make her visually different than stuff I'd drawn before.

How did illustrating for the Orc Bard differ for you from your previous Munchkin illustration experience?

Working on Super Munchkin, I was only required to draw the line art, and the coloring was handled in house. For the Orc Bard, each card needed a background and a higher attention to finishing details and a painterly color approach.

What do you think of the Orc Bard? Is she rad?

Oh yes I hope so!! I certainly tried to make her kick some butt.

What was your inspiration/thought process as you approached illustrating for the Orc Bard?

Aside from John's character design, I looked at a lot of the early British punk scene for things like fashion and makeup ideas.

Which card did you have the hardest time drawing? 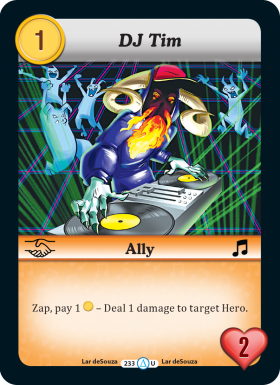 Possibly the hardest was DJ Tim. Tim and the disco dancing monsters weren't the problem though. It was all those neon lasers – making them not so strong they obscure the image or the text of the card, but still capture the music club feel.

And which one was easiest, or relatively easiest?

I'd have to say Elvish Impersonator was one of if not the easiest. No particular reason though. I think I just managed to get him right the first time around in all the stages of creating the cards.

Do you prefer drawing the Orc Bard herself, or the Monsters and Allies?

That's a tough question!! Probably the Orc Bard herself because I didn't have to worry about getting her wrong. Allies, I would worry about missing a key detail one of the other CCG artists had put in to really make that character alive. Monsters are great fun but I tried to really vary them up so I would spend longer on deciding what they might be and how they might work for a particular card.

What’s your favorite Orc Bard card and why?

Ask me to choose a favorite child instead. I've only got two of those! But if I have to choose . . . hm . . . maybe the Shrieking Fans. Drawing monster fangirls in all those variations was a lot of fun. I tried to model them after the kind of fans you'd see in photos of old Beatles concerts when they were starting out.

If you yourself were an Orc Bard rockstar, what would your most popular song be called? 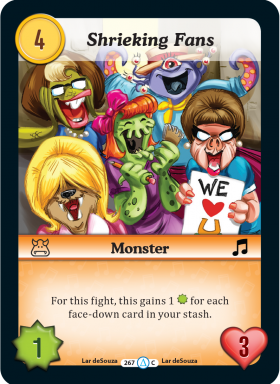 Hahahaa! I'm really not very musical. My tastes are more Weird Al Yankovic than the Ramones. My most popular song would likely be "Pay me to stop singing!"

Where can fans find you online?

My webcomics are Least I Could Do and Looking for Group. I'm most active on Twitter as @lartist, but you can find me on Facebook as Lar deSouza or Instagram as @uncalar.