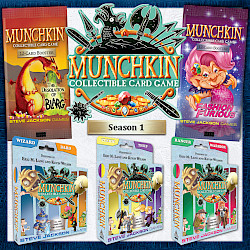 Season 1 of the Munchkin Collectible Card Game will be available soon! Here's the schedule of releases:

In February 2018, we'll release three starter sets that include everything you and a friend need to play. You'll want to buff up your deck to smash your opponent, so at the same time, we'll release randomized 12-card booster packs, each of which will contain a rare or maybe even rarer than rare card!

Three months later, we'll provide you with another set of 12-card booster packs named The Desolation of Blarg. To further accessorize your hero deck, Fashion Furious will be on-trend in August 2018 with yet another wave of 12-card boosters. 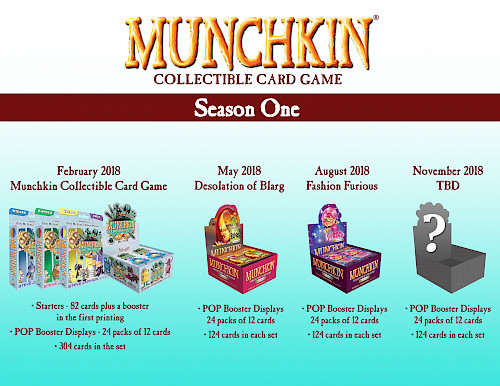 Get these boosters as soon as they're released and build a strong, custom deck to get a leg up on your opponents. And keep watching munchkinccg.game for more news and announcements!