Steal the Win with the Elf Thief 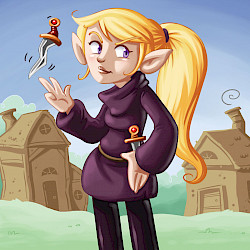 Bluffing, cheating, and stealing – that's the way of the Elf Thief in the Munchkin Collectible Card Game. This class gives you plenty of ways to benefit from bluffing, play up the Thief's ability to draw extra cards, or keep your opponent from doing what they want to do. All these things can help you in your quest for victory!

The Elf Thief's ability reads: Draw 2 cards. Then move 1 card from your hand to the bottom of your deck. With that in mind, let’s take a look at some of the cards you'll find in the Thief class. 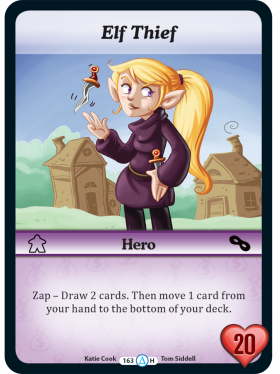 The game effects listed above suggest several possible deckbuilding strategies for the Thief. I’ve described a few of them below. If you come up with others, we’d love to hear about them!

Go forth and steal the day from all those silly, more honorable Heroes. Oh, and pick up a Cleric & Thief Starter Set when the Munchkin Collectible Card Game releases in February 2018! You can read more about the Dwarf Cleric here.