Synergy in the CCG, Part 1 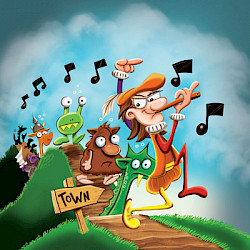 When you are building a deck for the Munchkin Collectible Card Game, you should keep card synergies in mind. A synergy is where two or more cards work together to achieve something better than the sum of their independent effects. While you are building your deck, you need to assemble 40 cards that work better than the 40 that your opponent is using. With this advantage you will see a greater win percentage against people who randomly put 40 cards together without much thought. In this article, I will give some examples of synergies that you can look for when building your deck.

Let's start with Moose. This is a decent card in the mid-game that does a good amount of damage with 4 power and 6 life. At a cost of 5 gold, you can be confident that it will most likely survive an engagement with a weapon and deal a hefty amount of damage to your opponent, all by itself – but with a little work, we can make this card even better.

The Flaunt ability on Squirrel is made to be used with Moose. You have to discard Squirrel after the flaunt, but your Moose friend now has 7 power, possibly causing even more damage to your opponent. 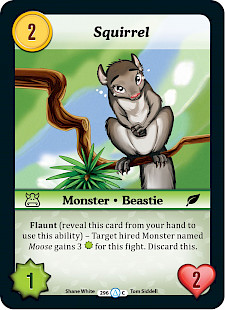 Now, consider that you are allowed up to three Squirrel cards in your deck. You could hire Moose for the same 5 gold and potentially give it 13 power.

But wait, there's even more you can do:

Adding Rawr! gives Moose more power and more life for only 1 gold. The life is especially important since Moose has to survive your opponent's defenses before it can do any damage.

And, again, you can have up to three Rawr! cards in your deck. 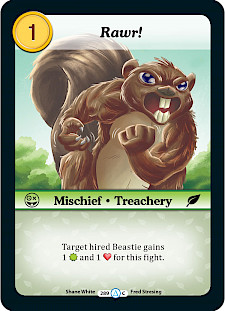 Each player is allowed one Location in play at a time, in effect on both players' turns, and these can also set up a combo with a hired Monster. In this example, both Locations can provide even more Power to Moose.

You could even attack with another Monster first so that it is safely in your stash before you attempt to hire the Moose. Having Pied Piper in your stash gives your hired Moose one additional Power. 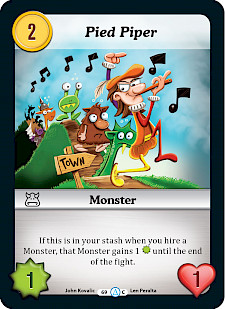 Let's review this first example. Moose starts at 5 Gold / 4 Power / 6 Life. If you flaunted all three Squirrel cards, that turns into 5 Gold / 13 Power / 6 Life. With a School of Badassery in play as well, either yours or your opponent's, you could pay another gold to be able to Hire the monster, but it would be worth us 2 additional power; now we have a 6 Gold / 15 Power / 6 Life Moose. We can also use more Gold late in the game to cast three Rawr! (each with a cost of 1 gold) for an additional 3 Power and 3 Life. After everything is done and the dust has settled, you would have paid 9 Gold to hire a Moose worth 18 Power / 9 Life. Not a bad investment! 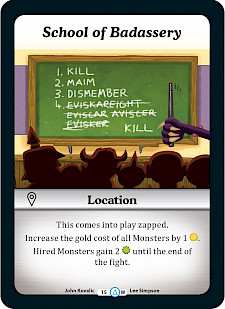 Getting everything to fall into place just like this may be hard, but even smaller synergies can have a positive effect as you pile damage onto your opponent's Hero card.
Check out part 2 for more on a second type of card synergy!