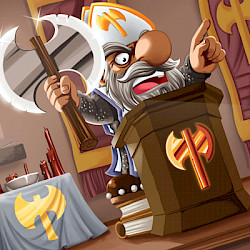 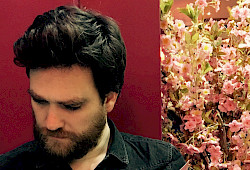 In the Munchkin Collectible Card Game, the Dwarf Cleric plays to survive just a bit longer than his opponent. The illustrator of the Dwarf Cleric deck, Tom Siddell, is a master at playing the long game. His Gunnerkrigg Court comic has been wildly popular for more than a decade, and he’s been able to work full time on it since 2012 thanks to his fans' support.

Within the Munchkin world, Tom illustrated the Munchkin Booty Guest Artist Edition and he's written stories for the Munchkin comics from BOOM! Studios. Steve Jackson himself is a fan of Gunnerkrigg Court, so having Tom contribute to the Munchkin Collectible Card Game was a treat for everyone involved!

We wanted to get Tom's thoughts on illustrating this game. Below, you’ll discover what the process of illustrating the pious Dwarf Cleric was like for him:

What did you do to prepare to illustrate for the Munchkin Collectible Card Game?

Before I was asked to work on the [Munchkin CCG] I'd drawn a guest artist edition of Munchkin Booty and written a number of issues for the Munchkin comic from BOOM!, so I was familiar with the humour and style of Munchkin working on this new game. I had some references and descriptions sent over to me when I started work on it so I had some time to digest those and think about the character of the Dwarf Cleric before getting down to work.

What influenced your design for the Dwarf Cleric deck?

John Kovalic, who did all the original Munchkin art, had already drawn a dwarf that was a cleric, so I was mainly influenced by his drawing, but I also wanted to make him look a little meaner, with a much bigger beard. Aside from that, I was provided with some descriptions of his personality and various accessories, so I was able to put together a coherent design that pulled all those elements together.

You create and illustrate the world of Gunnerkrigg Court. Is there any background that you gave the Dwarf Cleric to help with the process of illustrating him?

I did think a little about the cleric's personality beyond what was provided, and since these are all-new characters I was given a lot of artistic licence. I pictured the cleric as having a very literal "holier than thou" attitude, a sort of smug resignation to his role of moral busybody. I figured that someone in that position, who had very real back up from a higher power, as shown in some of his cards, couldn't help but be pretty self-righteous.

How is illustrating part of a collectible card game different from anything else you've done?

When I've worked to spec in the past, a certain amount of back and forth is expected during the development stage to make sure the artwork hits the target. When I worked on the [Munchkin CCG], any changes that were made were very minor and I had a lot of freedom to illustrate the cards how I wanted, which was really fun. As for the drawings themselves, I almost saw each one as a panel from a comic, so I had experience in making sure all the details are focused on and composed properly. The colouring style was different from my usual comic work, since each one is very much a small illustration in its own right.

How would you compare drawing the Dwarf Cleric cards to drawing the Guest Artist Edition of Munchkin Booty?

Were there any challenges illustrating this deck that you didn’t run across with Munchkin Booty Guest Artist Edition or vice versa?

Aside from the colouring style, which was slightly different to the style I usually use in my comic, I was working as part of a larger team of artists on the [Munchkin CCG], so sometimes I would have to wait for someone else to finish their card if I was working on one that depended on details from that card. Despite this, things went really smoothly and it's rare to have so many different people working on a project like this and have it all go through so well. I can thank the great people at Steve Jackson Games who brought us all together on the project and made sure everything was on track.

What did you most enjoy about illustrating the Dwarf Cleric cards? 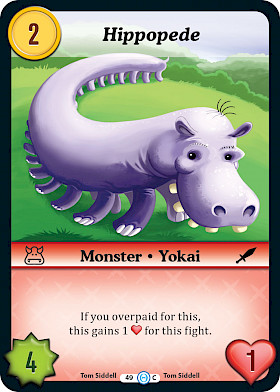 My favourite part was getting the initial card descriptions because that's when nothing is set in stone and I can think of a bunch of different ideas for each description. Then I can sketch out a few different scenarios and pick the one I like best to take through to completion. The colouring was interesting, too, since it was a little different to what I normally do. I learned a few new things getting it right that I use in my regular work now too!

Was there a card you struggled the most to get right?

I don't know if this counts as a struggle but there is one card called Hippopede which is a hippo crossed with a centipede [Ed. note: found in The Desolation of Blarg], and I found myself wanting to take it in two different directions. My first instinct was to make a completely disgusting, horrible monster that incorporated a real hippo's strange horn-like yellow teeth and alien face with the chitinous, plated look of a scary centipede. But I thought about it for a little while and decided to make him cute with a big goofy face and loads of little legs instead! 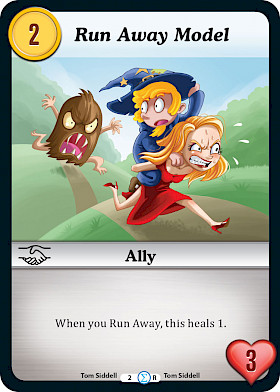 What was your favorite card to illustrate?

I just finished working on the cards for a future expansion pack and I think one of them is my new favourite. It's called Run Away Model and it's based on one of the cards I did for the base game called Leecher in which the Human Wizard is running away from a big monster. I sort of based Run Away Model on that one compositionally, and I think it came out pretty funny. I like the model's face especially!

What projects are you currently working on? 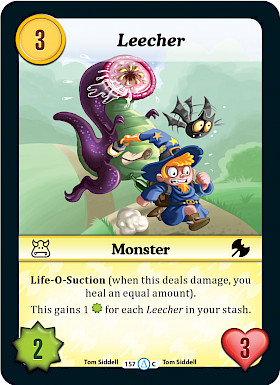 I'm always working on my comic! Aside from that, which takes up the most of my time, I have other side comics to make, and the occasional YouTube video to put together. I'm also about to get started on another job for Steve Jackson Games called [redacted].

The Cleric and Thief Starter Set is available at your friendly local game store, so you can purchase it now to admire the heavenly Dwarf Cleric deck. And if you’d like some helpful tips and tricks on how to send your rival straight to purgatory, check out our Dwarf Cleric strategy article!